In recent years, George Wright has again gained notoriety by being chosen as Golf Digest's Best Municipal Course in Massachusetts and the 14th Best Municipal Golf Course in The U.S. by Golfweek in 2009.

Who was George Wright?

George Wright was a Hall of Fame baseball player who played for the Cincinnati and Boston Red Stockings in the 1800's. After his baseball career, Wright became prominent in the Boston community through Wright and Ditson Sporting Goods, which imported and sold golf clubs in the Boston area and helped in the development of Boston's Franklin Park Golf Course in 1890. The legendary Francis Ouimet was once an employee of Wright and Ditson Sporting Goods.

In the later stages of his life, George Wright continued to champion the growth of golf in Boston. 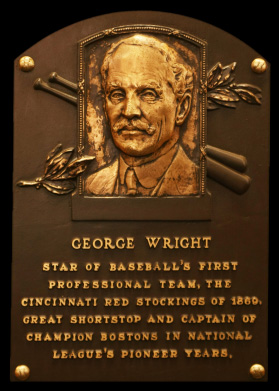 In the late 1920’s a group of citizens in Boston came into the control of the Grew estate in the Hyde Park section of Boston. Their intent was to have the City of Boston build a golf course that would actually be a private club. The legendary Donald Ross was commissioned to design the course and when the market crashed in 1929, the project was abandoned.

In 1932, Walter Irving Johnson, who had worked for years as an Associate of Donald Ross, took on the project as an engineer for the MDC. George Wright became one of the great feats of engineering and building in the annals of golf. Before completion, 60,000 pounds of dynamite were used to excavate the ledge, 72,000 cubic yards of dirt were spread to raise the ground above the swamp level and 57,000 linear feet of drainage pipe were laid to drain the property. The WPA provided the funds to build the course, estimated at $ 1,000,000 by completion in 1938. At one time, it was estimated that 1,000 men worked on the project.

By completion, George Wright Golf Course sported a full sized 18-hole golf course as well as a six-foot rock wall that encircled the entire 156-acre site. In addition, a Norman-style clubhouse of mammoth proportion was constructed at a cost of $ 200,000.

After decades of contracted management , the City of Boston decided to take over operational control of the facility in 2004. The decision was made to provide the best golf experience possible for the city's residents at an affordable rate. Since taking over operations, George Wright has gradually returned to prominence as evidenced by being selected as a MGA Amateur Qualifying Site in 2009.